“I’ve performed everywhere from London’s West End to Broadway to Paris. But this is indeed the greatest adventure of my life!” Panto legend Ross Petty says Farewell.

“It’s a bittersweet ending, said Petty. There will likely be tears. But it’s time to go. “Yes, it’s the final weekend,” he said. “It’s the weekend I have not been looking forward to all year.”

Saturday signifies two conclusions. It’s closing night for “Peter’s Final Flight,” the colourful, irreverent Christmas panto at the Elgin Theatre on Yonge Street. Closing nights tend to be tinged with sadness regardless of context, but the last bow of “Peter’s Final Flight” doesn’t just signal the end of the run. At least for now, it represents the end of an era in Toronto theatre, a pause to the Christmas panto tradition until another theatre company can assume the responsibility of producing the mammoth show.

“Peter’s Final Flight” has been the perfect final story to tell on the Elgin stage, said Petty. While two virtual shows in 2020 and 2021 kept the Ross Petty panto in the public consciousness in the absence of live theatre, there’s nothing like being back onstage.

“The pent-up demand has certainly been there,” said Petty. “And the results have just been extraordinary the results. The audience reaction has been amazing.” Audience reaction is perhaps the most important measure of a quality panto — the loudness of the boos, the synchronicity of the crowd shouting “oh no you don’t,” the fervour of the applause for the story’s hero. It’s unlike nearly any other theatrical experience.

“It’s amazing. It’s the only entertainment I’ve ever been part of, during my entire life as an actor right out of university in Winnipeg, that I’ve seen that kind of response from an audience,” said Petty.

He technically retired from appearing onstage as the bad guy in 2015, pivoting to focus solely on the producing demands of the annual show — finding sponsors, hiring a team, organizing marketing. For his “final” role in 2015, he was Hook, too.

What happens next for the show is unclear. “I very much hope someone will pick up the baton and carry it forward … that someone will see the beauty of the shows, how many thousands of children have embarked on the process of loving live theatre with our shows, and fill the gap after we’ve gone,” he said.

Saturday arrives, and I find myself sitting next to another single woman — we’re two outliers in an auditorium full of children and their parents. Every time Petty comes onstage, the traditional boos give way to roaring applause. In the final coda of the sprawling show, Petty, playing himself, comes onstage to speak with Dan Chameroy’s Plumbum, and he tells us just how much fun he’s had making these shows for 25 years.

The standing ovation is instant, enthusiastic and long. Following the curtain call, Petty steps forward — “to read from Prince Harry’s new book,” he jokes, ready as always for a punchy quip.

“It’s time for Karen and I to ride off into the sunset,” he says, wiping a tear from his eye and smiling at us. “My wish for our audience, is that your hearts never grow up!” 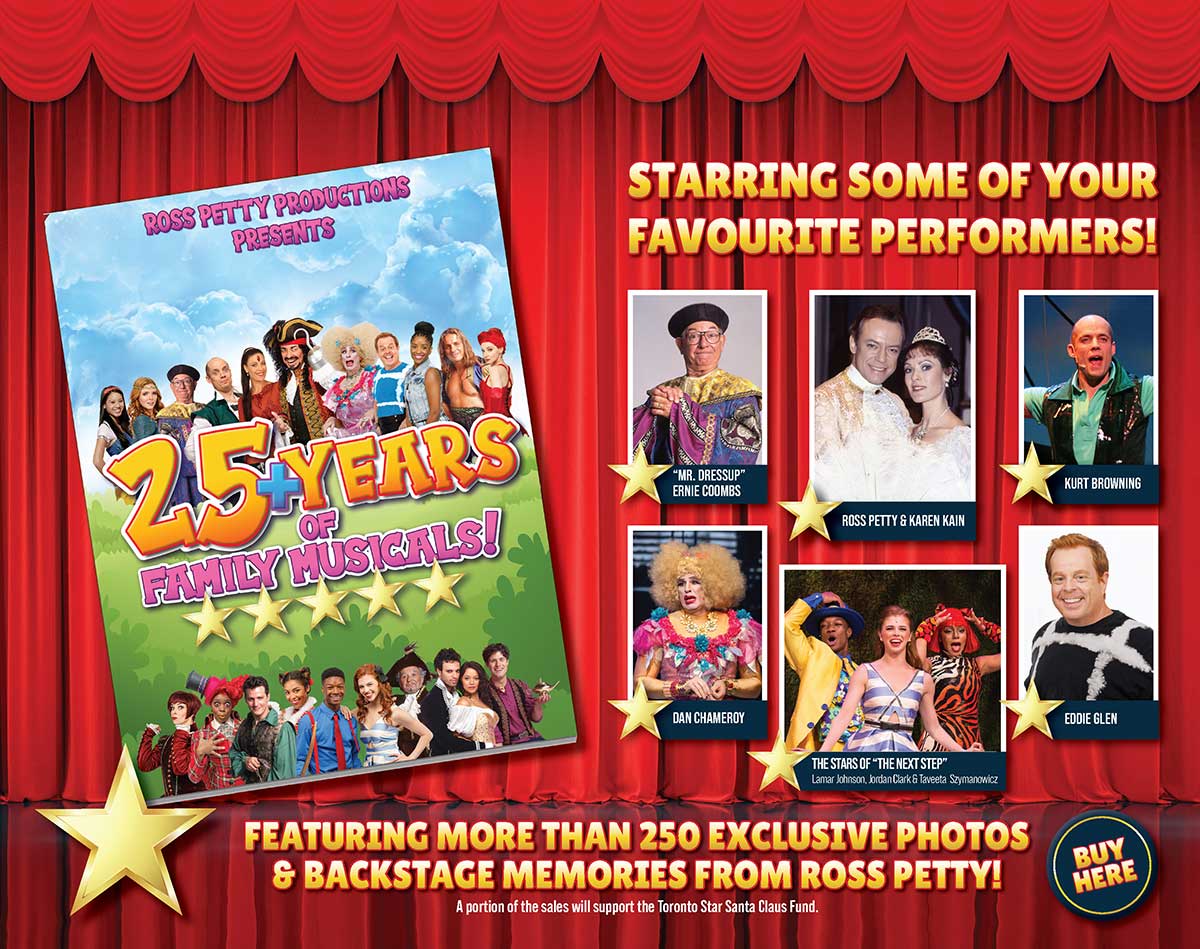 Ross Petty is the king of the Canadian Family Musical. For more than a quarter century he's been producing live theatre versions of these beloved fractured fairy tales. Ross has employed Canada's foremost musical theatre performers and legions of Canadian artists and designers to create and perform these original works. He has just published a book about this grand adventure, which actually began at the Royal Alexandra Theatre in 1984 when he starred with his wife Karen Kain in Dick Whittington and his Cat. Filled with hundreds of colour photos, including Ross' remembrances of every show, and featuring a who's who of Canadian showbiz, 25+ Years of Family Musicals is a must-have keepsake of this fascinating chapter in our cultural history. No theatre-lover should be without it.

The purchase price of the book is $39.95 (includes HST) and shipping by Canada Post is $15... or free curb side pickup from the Princess of Wales Theatre on King Street West.

Over a century of entertainment! Located in downtown Toronto, this historic showplace has been our home for 24 years.
Find out more

Join us for Ontario’s favourite holiday event and reach thousands of Ontario families.
Find out more

Share the joy of the holidays with your clients, customers, employees and their families.
Find out more

With the state of the world in total upheaval, Lewis Carroll’s fantasies feel like the perfect entertainment for the times. So Ross Petty Productions’ Alice In Winterland – its second annual virtual panto offering – should entertain loyal fans and earn new followers suffering from pandemic fatigue. And there’s even more fun audience participation in store if you decide to watch the Pick Your Own Path version of the show. Since links to the show are available for 72 hours, you’ll have enough time to watch both versions.

This ‘Alice in Winterland’ placed a smile on my ol’ face. It charmingly brought me back to some wonderful memories of reading classic stories, sharing laughter during the Christmas and holiday season, and just being a kid again for a little while. There’s nothing wrong with that. Read full review

“No holiday season is complete without a Ross Petty production.
Big laughs and big fun for the whole family.”

"Amazing show as usual! We are in our 6th year at the Elgin. Can’t wait for next year."

"You have made so many memories for so many families. I can attribute the love of theatre that my 5 nephews and niece enjoy to the positive experiences you provided. I want to insure that you know how profoundly you have touched my family and how grateful we all are for the investment of time and energy that it takes to bring such a labour of love to life. We thank you for years of laughter and joy!"

Dear Ross Petty and all your team,
What a fabulous production of Peter Pan!
You all were truly wonderful, and followed the tradition of the Panto in the best possible way. My wife and I were celebrating 37 years of marriage and for our anniversary we booked tickets for your show. We were truly delighted with the entire production, the humour, the dancing, the singing just everything was so amazingly classic. Keep up the great work Ross we will be bringing the entire family of 9 people next Christmas for your show for sure!!!